The Red Hills, like the Ozark Plateau in southeastern Kansas, are probably not the image a tourist or even many Kansans would conjure up when thinking of Kansas. Though both regions are in the southern part of the state, they don't look alike. The Ozark Plateau in the southeast corner has tree-covered rolling hills. In contrast, the Red Hills in south-central Kansas don't get as much rainfall, so, except for cedars that dot the landscape, trees are sparse and the air is dry.

Thick shales and soil in this region are red because they contain iron oxide, also known as rust. The hills, of course, got their name from their color but they just as easily could have been named Flat-top Hills because of their shape. Many of the hills in the region are flat-topped, a shape not commonly found in Kansas. Flat-topped hills known as mesas and buttes are more commonly found in the desert southwest in Arizona or New Mexico. 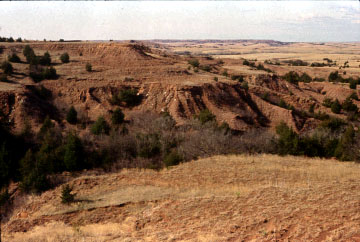 Sometimes hills and valleys are formed when underground rocks, rather than surface rocks, are eroded away. Big Basin and Little Basin in the Red Hills region in Clark County were formed when underground salt and gypsum deposits were dissolved by water, creating empty spaces between rock layers. The land above collapsed into the empty space, leaving a dip in the ground. Holes formed in this way are called sinkholes.

Sinkholes come in all sizes, some only a few feet across. Others are very large. Big Basin is a mile across, about 100 feet deep, and has a highway running through it. Many of Kansas' natural lakes and ponds are water-filled sinkholes. St. Jacob's Well, a pool in the bottom of Little Basin, was formed by a spring.

Kansas Geological Survey
Updated March 14, 1997
Send comments to webadmin@kgs.ku.edu
The URL for this page is http://www.kgs.ku.edu/Physio/redhills.html