When settlers first moved to Kansas, many of them passed the Flint Hills by. They wanted good farmland, and the rocky soil was too hard to plow. Although the area is now used for grazing cattle, not much of the land has been plowed to grow crops, and the Flint Hills remain, for the most part, a natural prairie grassland.

The Flint Hills region, which runs north and south through east-central Kansas, is one of the few large areas of native prairie grassland left in the United States. The grassland that covers the Flint Hills once covered most of central and western Kansas and the surrounding states. When people moved in, the prairie in other areas became covered with farms and cities. Away from the roads and buildings, the Flint Hills region looks much as it did 10,000 years ago. 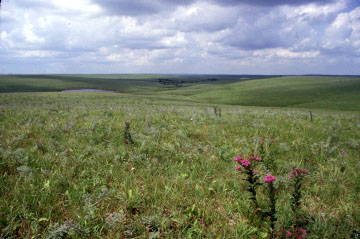 Although the Flint Hills region is known for its rolling grasslands, it is named for flint, a type of rock that is found embedded in the limestone that forms the hills. Flint, also called chert, doesn't erode as easily as the softer limestone. When the limestone at the surface is eroded by wind and water, it eventually breaks down into soil. The exposed flint is broken down into gravel, which mixes with the soil and makes the ground rocky.

Kansas Geological Survey
Updated March 14, 1997
Send comments to webadmin@kgs.ku.edu
The URL for this page is http://www.kgs.ku.edu/Physio/flinthil.html